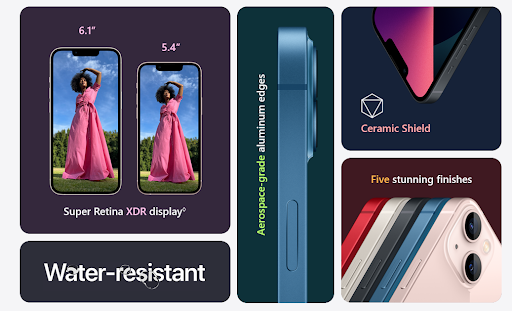 Apple’s latest smartphone release, the iPhone 13 series, features numerous upgrades and striking features that have been earning praise and favourable reviews from Apple enthusiasts. Aside from presenting an array of new features, the iPhone 13 release has also addressed and improved upon some of the issues and flaws existing in previous models.

All the devices in the iPhone 13 line-up are currently available at TELUS with a range of service plans to choose from depending on needs and preferences. The series includes the standard iPhone 13, iPhone 13 Mini, iPhone 13 Pro, and iPhone 13 Pro Max.

While the iPhone 13 Pro and Pro Max are typically getting the highest ratings from reviewers, the standard model and the Mini are also high quality smartphones offering a more cost-effective option.

Loyal iPhone users have come to expect power upgrades with each new smartphone series release. The iPhone 13 line-up delivers on this expectation with the most powerful chip currently available in a smartphone.

The A15 Bionic chip, which is the processor that drives all iPhone 13 devices, not only enhances speed and performance but also contributes to longer battery life. The chip features a neural engine constructed with 16 cores which can perform up to 15.8 trillion operations per second. Multi-tasking is simple and uninterrupted with such power at your fingertips. The 15 billion transistors offer better graphics and enhanced AI capabilities.

In the past, entry level iPhone models tended to offer less than expected when it came to storage. However, the iPhone 13 series comes standard with 128GB of storage, which can be upgraded to 512GB for standard models and 1TB of storage for the Pro models.

Camera quality is quite often an important feature when selecting a smartphone as they are heavily used for a variety of purposes. The cameras on the iPhone 13 series do not disappoint as all devices have received considerable upgrades. While the iPhone Pro and Pro Max do feature superior camera systems, all models impress with camera functionality and performance.

iPhone 13 models have been fitted with larger sensors to capture more light and automatically adjust more quickly. The main sensor now lets in 47% more light than the sensor on the iPhone 12. This provides better image and video quality regardless of the specific task or activity. Improved sensors also result in better image quality and detail in low-light settings.

This feature is used to keep the lens unit within the camera stationary while the sensor moves and adjusts based on the content in the frame of the image you are trying to capture. The result is enhanced stability when capturing still images. This feature is great for compensating for hand jitter or taking images while in motion.

The design of the rear cameras has been shifted to a diagonal pattern instead of a vertical one to accommodate a larger camera system without having to expand the size of the phone. The Wide camera now receives significantly more light and the Ultra Wide camera is equipped with a faster sensor to enhance detail and contrast even in dark environments.

While the camera hardware has received considerable upgrades, software improvements have also been made for video recording. Cinematic mode allows you to record video like a director without all the experience and training. Filmmakers typically use a technique called rack focus to seamlessly shift the focal point in a frame from one person to another. Cinematic mode makes this transition automatically by anticipating when the action is shifting to another subject. For example, when a person speaking in the frame turns to look in another direction, the focus will automatically follow.

There are a variety of other useful and impressive features included in the iPhone 13 line-up.